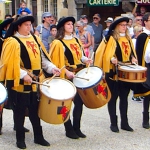 Inspired by a hill known as Mons flanquinus, he decided to build a new town right on the top of it on the edge of Périgord in Haut Agenais.”

It was to be a fortified town (bastide), with each inhabitant given a plot of land within the walls and another outside for growing food and collecting materials for building and to warm their homes. Together they built arcades around a central square to offer shelter from sun and rain.

The town’s charter in 1256 freed all the inhabitants from paying taxes or tithes. Instead money would be raised through paying for privileges and fines for bad behaviour. These fines were imposed by the Bailiff, the king’s representative, and six Catholic councillors. “We are in Cathar country,” Janouille says, referring to the medieval heretics. “The first Cathar bonfire was lit at Casseneuil [about 15 kilometres away] in 1209. Many more were to follow.”

Alphonse and Jean died without heirs and their lands were surrendered to the English. In 1286, Edward I, King of England, fortified Monflanquin with 3,000 feet of ramparts, 11 towers and five gates (dismantled in 1628). Over the next 300 years the town changed hands often between the English and French, the Protestants and Catholics. “I remember,” muses Janouille, “that by the end of the 16th century, the well on the edge of town contained a layer of Protestants, a layer of Catholics, and a layer of Protestants.” With Janouille, history is fun; as he recounts the tale he pulls out clothes from his bag and the children dress up as characters in the story.

The Place des Arcades under the vaulted arcades, and beneath the house that was once the quarters of Edward, the Black Prince, “an English knight, scourge of the French, who captured King John of France in Poitiers in 1356,” according to Janouille.

In 2000, a copy of the town charter was found in a house on the square and Janouille gets one of the fathers, who is dressed as the Bailiff, to read from it: “There will be a market every Thursday. Fairs are to be held on the first Thursday of the month.” (“We still do it the same way today,” interjects Janouille.) “Whosoever uses bad language or is involved in a fight will be fined. Whosoever throws rubbish in the streets may be punished by the Bailiff or his representatives in whatever way they see fit.” “So be careful how you treat our village!’ Janouille warns, wagging a finger. A festival that wraps its arms around you … quite spooky.

Travel Tip created by Jenny in association with Vacation Soup