Here are our favourite things to see and do in Destination.
Some are well know, some not so well known. Have a look around as we have included photos, videos, information and links.
They are in no particular order.

Aiguillon station is just 8 minutes away from Gone Fishin. The train to Bordeaux  offers a pleasurable journey looking at the countryside. Book on line or in person.

History … As part of the inheritance of Eleanor of Aquitaine, Bordeaux, along with the rest of the duchy, became English in 1154 upon the accession of her husband to the English throne as Henry II. His 14th-century descendant Edward the Black Prince, who for 20 years held court at Bordeaux and whose son, Richard (later King Richard II), was born there, is still honoured in the city. Under the English, Bordeaux was given unusual freedom: mayors were elected from 1235, and a thriving trade developed with England’s ports. Neighbouring towns such as Saint-Émilion and Libourne joined a federation under the leadership of Bordeaux. After the French victory over the English at Castillon in 1453, the city was united with France; but the burghers of Bordeaux long resisted limitation of their municipal freedoms, and 120 of them were executed after a salt-tax rebellion in 1548.

2. Enjoy the waterways . All so close to Gone Fishin'.

A picnic with bikes or just a walk down the delightful scenic waterways.

On entering the town of Agen having taking the route of the N121 from Gone Fishin you cant help but focus to the left and right of you this spectacular site Du Pont Canal, and even more delights awaiting you in Agen

The old centre of town contains a number of medieval buildings.

The twelfth century Agen Cathedral, dedicated to Saint Caprasius, is one of the few large churches in France with a double nave, a regional trait also found in the Church of the Jacobins in nearby Toulouse.

The Saint Hilaire church, dedicated to the theme of the Holy Trinity which the Saint in question did a lot to defend, is notable for its unusual statues in front of the Church – Moses on the right, and St Peter on the left.

The Fine Arts museum, Musée des Beaux Arts contains artefacts, furniture and sculptures from prehistoric times onwards. The art gallery contains several hundred works, including several by Goya, and others by Bonnard and Seurat. The collection also contains a large number of works by artists who lived locally. The museum is made up of twenty or so rooms.[5]

The Canal des Deux Mers, which joins the Mediterranean with the Atlantic, crosses the river Garonne at Agen via the town’s famous canal bridge.

Come on down to Praysass with us for a coffee on a Sunday morning. Enjoy the buzz of the atmosphere and of course the yummy  cream cakes and should you with you can pick up an English newspaper. 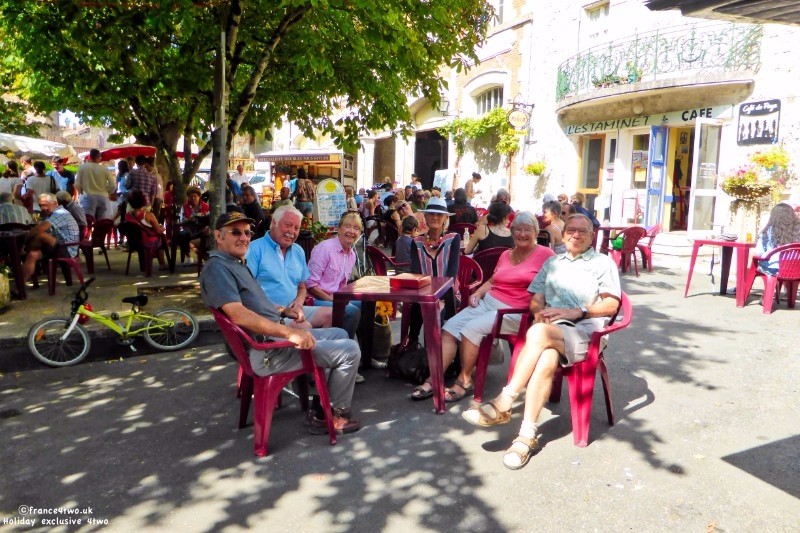 Prayssas is a commune in the Lot-et-Garonne department in south-western France. On Wednesday nights from June to September, there is a night market called “les marchées nocturne” selling local produce. There is a Sunday morning market all year round. Towards the end of August, there is “La feria des fruits” the fruit festival which consists of celebrating the end of summer and the fruit harvest and drinking. A tradition is to wear a red bandana and a white T-shirt or a yellow bandana and a red T-shirt. Prayssas and the surrounding area has a significant British population.

4. Trotting Races Day Or Night Maybe Have A Flutter.

Lots to write , will be back

A visit to Latour-Marliac is so relaxing and for the photographer a sheer delight. Enjoy over  over 300 varieties of  tropical and hardy water lily in their French National Water Lily Collection, plus thousands more water lilies and lotus in cultivated pools, look for the greenhouse that holds the Victoria giant Amazonian water lily, and walk around 6 acres of landscaped gardens, get lost in the giant bamboo collection. The lake is so picturesque. That camera will never be still. In the summer months the cafe is open. Visit their website for opening time and a plan of the grounds . Most enjoyable especially knowing its so close to your holiday home here at Gone Fishin Aiguillon approx about 15 minutes away at Temple sur Lot

6. Turn yourself into a Drone for a few hrs and explore

ULM air base approx 15 minutes fromGone Fishin, so if your feeling adventurous ( an instructor is in the air with you) its one way to explore the beautiful countryside here in the Lot et Garonne

7. Hire A Small Boat For 2 And Enjoy a Similar Cruise This Larger Boat Takes

A Pleasure Boat For The Day

Prices and options and more information on their website here

Enjoy the cycling routes and maps available now so you can plan ahead before your holiday. Our visitors recommend this company that is close by to hire quality bikes from, they will deliver to your doorstep and run a service test for your approval.

The Lot-et-Garonne is full of pretty roads to cycle. Download the Lote valley by Bike

and also enjoy at leisure

The Lot valley cycle route runs along the river for 86 km along small, carefully-marked roads with low vertical drop. From the confluence with the Garonne to the castle of Bonaguil passing by Villeneuve-sur-Lot, it offers along the river green landscapes, orchards, bastides and farms.

We remind you that a bike route is not a bike path. The road is shared with car traffic.

The cycle route continues beyond the Lot-et-Garonne, in the Lot department, 80 km to Cahors.

Find any cycling route from this ingenious plan…. visit website

9. Aiguillon And Surrounding Towns And Villages Has So Much To Offer The Artist.

Some where there is an Art exhibition to be found or simply groups to join and spend the day painting the magnificent scenery. Or simply stay home at Gone Fishin and paint the flora and fauna.

10. Many Quality Golf Courses Near By

Also Located in the heart of the Lot-et-Garonne, overlooking the hills of the Lot valley, the golf Tombeboeuf offers a 9-hole course in the quiet of the countryside. On a slightly hilly and shady driving range, young and old can play golf freely or take a course given by a former English champion. After your trip, relax in the clubhouse or take a walk in the village 500 meters away; a restaurant and a view of the Valley are waiting for you. http://www.golfdebarthe.com/

The Villeneuve-sur-Lot Golf and Country Club  offers enthusiasts one of the best 18 holes in the Aquitaine region. Further details http://www.vslgolf.com/

The Albret Golf Club, is an 18-hole golf course . Perfectly integrated into its environment, it owes its authentic character and unique to the nature that has shaped it over time. 18 holes course – PAR 72 of 5810 meters. Equipment: practice, 3 holes school, approach area and 2 putting green.  Opening:Open all year. Rates Access to Green Fee: – 18 holes: from 45 to 55 euros – 9 holes: from 35 to 45 euros http://golf-albret.fr/

To Make You Smile... Enjoy

What a delight to watch, you just have to smile how she copes with her Lot and always with a smile.

Notoriety followed these 2 and they have quite a following . I think she deserves a holiday here at Gone Fishin’ but thats only if she leaves him locked in her own home!! Enjoy …

If you have any questions regarding the area, the property or availability please drop us a line. Or if you prefer call us on

We are here to help

Have Questions? - Ask Them Here